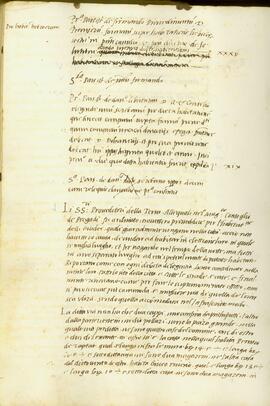 Office of the Secretary of the Dubrovnik Republic

Preserved interstate treaties and other documents from the 12th century offer evidence that the authorities oversaw the work of the public notary and the chancellery already at that time. Based on key provisions made during the 15th century, the central administration consisted of five offices located in the Rector's Palace. These were: The Public Notary (legal private affairs), the State Chancellery (legal public affairs), the Judicial Chancellery (criminal justice affairs), the Office of the State Secretary (legal state affairs) and the Slavic Chancellery, which would eventually be transformed into the Turkish Chancellery. The secretaries oversaw the process of taking minutes of the sessions of the Senate, the Minor Council, as well as of those of the Major Council. This fonds contains primarily minutes of the sessions of the Senate. In addition, secretaries would also compile the entire state correspondence as instructed by the Senate and the Minor Council. They also created diplomatic codes and deciphered diplomatic mail, issued state documents, such as certificates of the citizenship of the Dubrovnik Republic. According to the data, the influence of state secretaries increased substantially since the 17th century so that they could be considered as the main administrative officials of the Dubrovnik Republic.

Immediate source of acquisition or transfer

The fonds is fully accessible to researchers in accordance with the Ordinance on the work in the reading room of the State Archives in Dubrovnik and the Law on Archival Materials and Archives NN 61/18 (Pravilnik o radu u čitaonici Državnog arhiva u Dubrovniku and Zakon o arhivskom gradivu i arhivima NN 61/18).

Taking photographs and scanning are allowed, for a fee.

Existence and location of originals

Existence and location of copies

The fonds has been completely transferred to microfilms, but the microfilms are not available to the users of archives.

Fonds of the Dubrovnik Republic and the territory of the former Republic under the French Administration, series 3

Descriptions of fonds, series and sub-series are made according to the ISAD (G) standard (general international standard archival description)